When I decided to buy a new PHB, I knew I wanted one with at least one rod end.  Rod ends aren't really as necessary from a bind standpoint on PHB's as they are on LCA's (but they don't affect ride quality as much either), it's more of an issue of simply reducing deflection.  After my experience with Spohn rod ends wearing out so quickly (see my explanation on my LCA Page, and be sure to see the Rod End Update). I figured I'd need to add new, quality rod ends to the price of the part--because I'd be replacing the cheap ones very soon.  That nearly doubles the cost of the part.

When I found cheap aluminum tubing available from Coleman, I decided to make my own PHB.  That way, I could put the money I saved into decent quality rod ends from the beginning.

UPDATE:  There's no longer a need to cut and tap the PHB yourself as Coleman now stocks the material in various lengths pre-cut and tapped with wrench flats machined on each end Here.  That saves a ton of work.  Call and ask for one 40" long.  It's about $20.  This will give you a PHB adjustable for length from 43" to 44.5" while keeping  at least 1" of thread engagement on the Rod Ends (which gives you a large margin of safety for thread pull-out).  They come tapped with left-hand theads on one end and right-hand threads on the other end so they can easily be adjusted on the car with wrench flats machined in so you can tighten your jam nuts properly.

Note:  If your axle is skewed excessively to the driver's side with the stock PHB, you might want to go with a 39 1/2" long tube instead of 40".  I recommend 40" because that's what worked on my car and it ensures maximum thread engagement of the rodends.  Plus, you can always slice a bit off each end if it's too long--but if it's too short, I don't want people running around with only a few threads engaged on their rodends by my recommendation.  Every car is different and I don't want to recommend something that might not be safe on some cars.

In case you're wondering, yes, this PHB is strong enough.  It's good to over 3g's in a right hand corner before it buckles.  When I get done with my car it will handle well, but not quite that well.  The PHB won't fail unless I crash.  After a crash, whether or not $18 worth of aluminum survived will be the least of my worries.

Here are some pictures comparing the aluminum bar to the stock one:

The aluminum PHB weighs about 3 lbs.  The stock one weighs nearly 5 lbs.


The big soft rubber bushings vs. the rod ends:

The cheapest way to get spacers is to make them as shown below.  You can get the Rod End Reducer Bushings Here.  You need the 3/4" OD, 5/8" ID ones.  You'll also need four Flat Aluminum Spacers from the same place.  Hole size 1/2," thickness 1/2."  Two of these will need to be reamed to 9/16" if using the stock bolts. 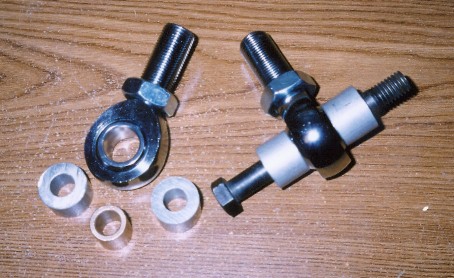 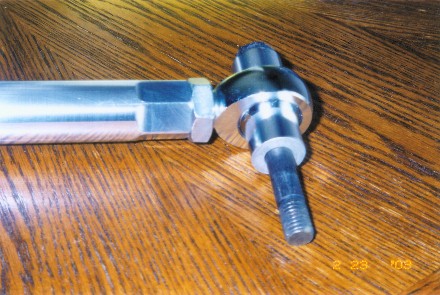 Or, if you have left over tubing from making your LCA spacers you can do the same thing as shown below--only slicing them off in 1/2" increments instead of 3/4."

These aren't quite as nice as machined, stepped spacers but I have yet to find any of those in the proper size for a decent price.  If you find a source for them that's reasonable price-wise, let me know.


Here are some installed pics (Now with the Unbalanced Engineering PHB Lowering Brackets):

By the way, if you want to shine it up a bit, 3M "Swirl Remover" Rubbing Compound (the stuff you use on your paint) will put a mirror-like finish on it in just a couple of minutes.